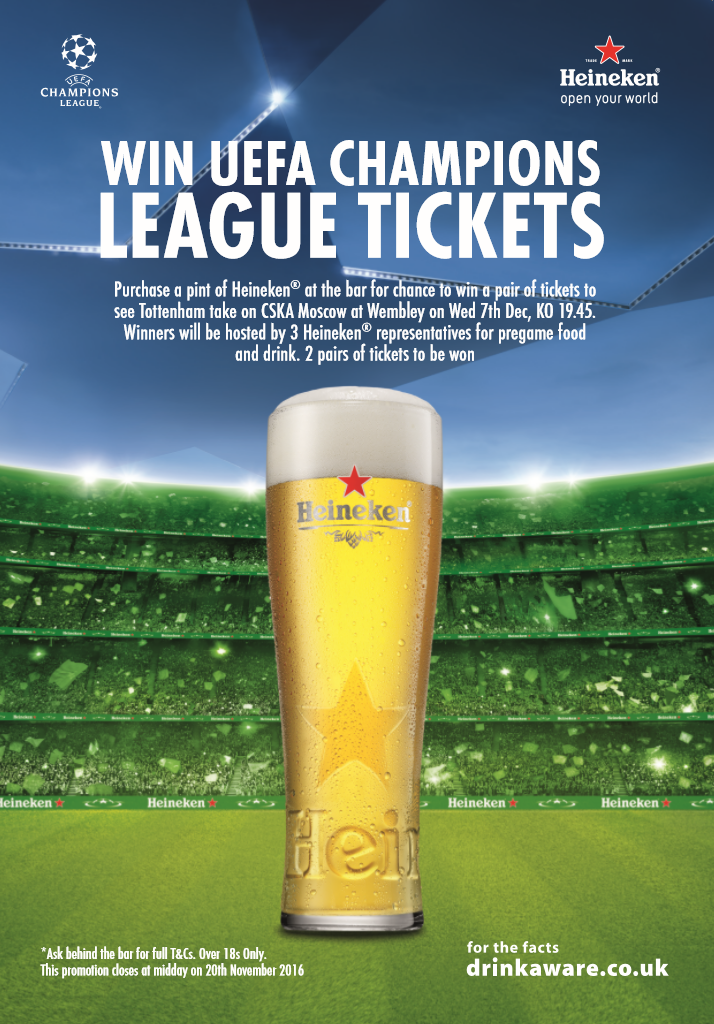 The UEFA Champions league has returned once again to grace pitch and screens across Europe. 32 teams go head to head, proceeding through the tournament until the devastatingly tense final play offs where one team will be crowned as champions and raise the cup.

This year, we have teamed up with Heineken to bring you a competition that any football fanatic would be crazy to miss. We are giving you the chance to win one of two pairs of tickets to see Tottenham vs. CSKA Moscow at Wembley Stadium on December 7th 2016. The winners will be hosted by 3 Heineken representatives and spoilt with pregame food and drink.

To enter simply buy yourself a pint of Heineken from any participating McMullen pub, fill in a quick entry form and hand it back to the team. A draw will take place on November 26th where the winners will be chosen at random to win the pair of tickets and attend the great game!

With the most diverse fan base, and supporters in over 214 different countries, to be a Tottenham supporter means you are definitely not alone. And this is your opportunity to be there in person! So what are you waiting for? Get down to any of the following before November 20th and enter now!

We will be announcing the winner on November 26th so keep an eye on the McMullen Twitter account for updates.

Now for those all-important T&C’s: Competition open to UK residents aged 18 or over, excluding employees of McMullen. Limit of one entry per person, all entries must be made via participating pubs. The winner will be notified by McMullens by email and phone using the details provided within 48 hours of the draw. If 2 winners cannot be contacted within 7 working days, the Promoter reserves the right to re-draw. For complete T&Cs click HERE or collect an entry form from participating outlets.

Update - And the winners are...

The draw has taken place and we are happy to announce the winners of this fantastic competition. The great guys over at Heineken were even kind enough to hand over ANOTHER pair of tickets so we were able to select another lucky winner to enjoy the game.

Congratulations to Mark Rendle and Peter Cunningham who took part at The Herald, and also to lucky winner Wendy Davolls from The Crown. Enjoy the game all!